Data-I-Guess is my personal project where I explore, analyze, and visualize open access data. I visualize data that I find funny| interetsting| disturbing (usually related to weird things people do since I am into sociology) and while doing so I get better at coding. I use mostly Python but sometimes R.

©2020 Johanna Blom | Template by Bootstrapious.com & ported to Hugo by Kishan B

The curse of gender equality

For a while, I’ve been having a nagging feeling that curse words/phrases are not gender neutral. That cursing, in fact, is a sexist practice aimed at women. 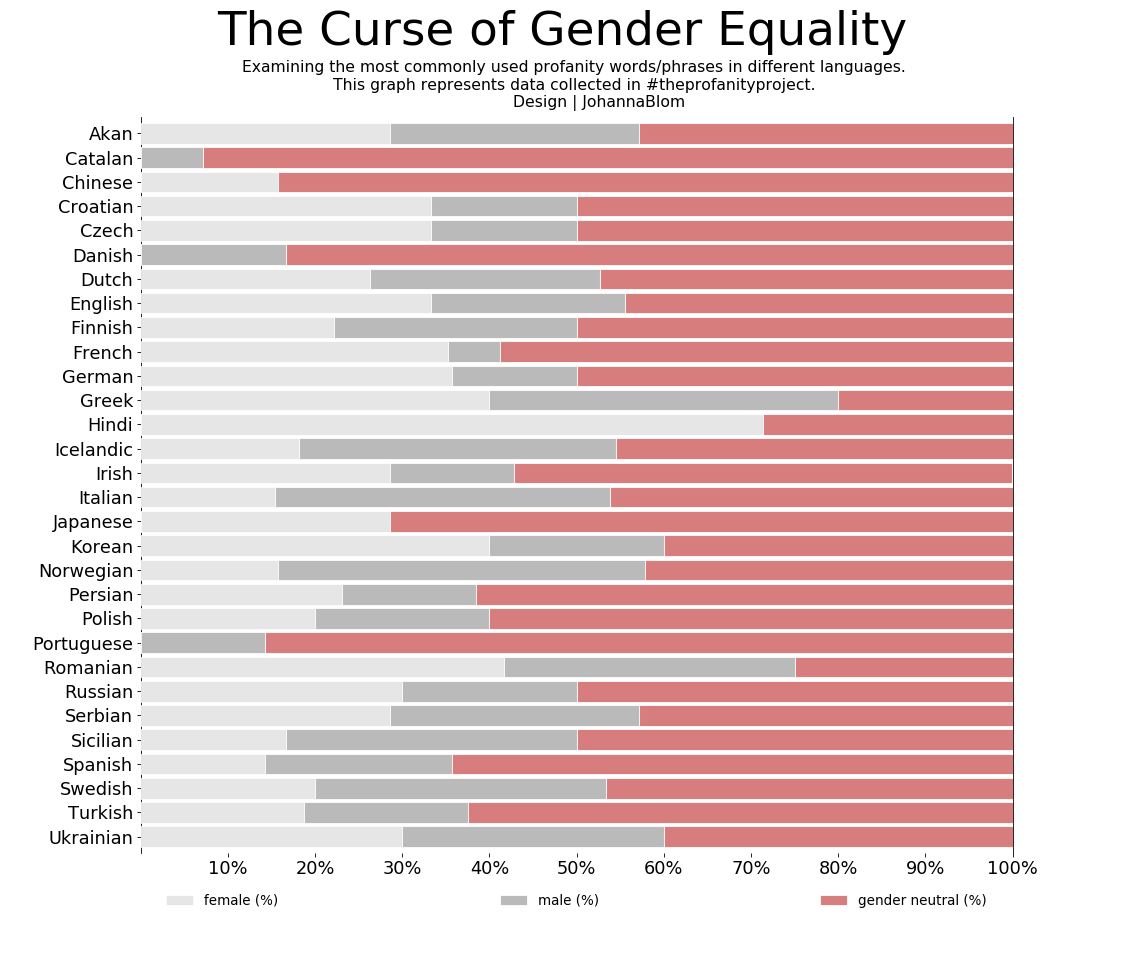 Since my feeling was founded on subjective experiences and a biased generalization I turned to research. Turns out, research mostly focuses on who curses (mainly men) and that it is very difficult to define what a curse word is. Wenbo et al. (2014) managed to, via tweets, make a list of 788 English swear words, I also found pages online for learning a language, i.e. “curse like a real [insert nationality]”. This did not help me, so, naturally to test my hypothesis: cursing is a sexist practice aimed at women, I turned to the Internet.

This is what I did

I wanted to create a dictionary of the 15 most commonly used curse/swear words/phrases in different languages. I gathered some data from reddit, quora and other similar places, I also created a Project page asking people to submit curse words/phrases directly to me.

I was interested in the literal meaning of words, not how they were used. If one curse by saying “balls” and it is intended as “darn” balls is still counted as the curse word. I needed people with expert knowledge to translate the curse, hence, I asked people to curse at me in their native languages and send me the translation in a list.

This is what has happened

People cursed! The profanity project contains, at this moment, roughly 330 words and 30 languages. Thank you to everyone that thought about and sent me their top 15 curse words/phrases! I am so very happy for your help.

This is the result

As you probably already figured out by the graph, my hypothesis is rejected. Turns out we are not sexist assholes but just regular assholes when cursing! In fact, in some language people seems to only curse using male or gender neutral phrases.

I will do a deeper analysis of the gender neutral curse words/phrases shortly!

How the words are coded

Firstly, the languages are bundled together, i.e., there is no distinction between regional differences within our outside countries. Spanish is counted as Spanish regardless if it is spoken in Mexico, Argentina, Chile, etc. Secondly, some languages have more curse words than others. Of course, everything is presented in relative numbers, but it might still be good to know this unbalance. Thirdly, I have coded the words based on either heaviness/emphasis (son of a bitch = female, horse dick = male) or understanding of the character (“fan” - the devil = male). Some (very few) are counted twice since they are depending on who you curse towards (Bayifo - you're a witch/wizard).

Is your language not represented? Or do you feel that this is completely wrong and you, in your language, curse way more/less sexist than this graph portrays? For whatever reason, if you want to contribute to this - you’ll find the Project page here. I will, after the second analysis, upload the dictionary and the code on my GitHub page for further contributions.